Going up in the world!

Ah, it's that time of year again.  It hardly feels as though there has been a respite from it, yet here we are already, dealing with our favourite nightmare - the dreaded Van Damp.  What made it all the more distressing was that we weren't even out of February yet when we first started getting damp and mould in the mattress.  At least last year it wasn't a problem until April or May, but come on, give us a break universe, this was still summer!

The only good thing about us noticing it so early was that it gave us time to do something about it before things got REALLY bad.  We discussed all sorts of solutions, from installing vents in the roof (both an expensive and daunting thought at the prospect of cutting holes in the roof of our 'house') to installing a fan in the base of the bed, to provide continuous air circulation and keep the mattress dry.  'What we really need is something with lots of holes in, that we can put between the mattress and the timber, so that we're not sleeping on a solid surface.  Something like a plastic pallet', I said wistfully.  But where were we going to find one of those?  There was nothing for it but to keep racking our brains for ideas and try to come up with a possible solution. 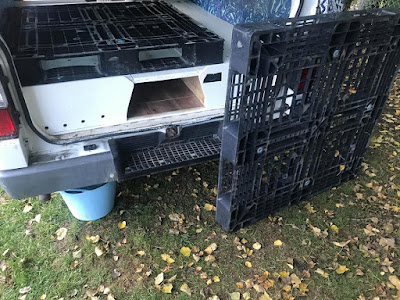 Just two days later however, the universe provided.  Or to be specific, a very helpful bloke called Dave.  'Bevin says we can have one of these', grinned Gareth, heaving something over to the van and plonking it down in front of the door.  Many motorhomers use wooden or plastic pallets, or indeed whatever else they can find that will do the job as a front door step.  It stops the ground by the door getting trampled and muddy and prevents dirt and grass from getting traipsed inside.  Our wooden step had recently given up the ghost and in its replacement we had just been given a large, square plastic pallet.

Immediately my eyes lit up.  'Are there any more?'  I asked, hopefully.  'Yeah, there's a whole stack of them, Dave brought them home from work', Gareth said.  Dave was Bevin's son, who when he wasn't working could often be found at the campground, renovating his bus.  'Ohh, you're thinking we could use them on the bed?' Gareth said as I nodded enthusiastically.  'Good idea, I'll go and ask!'  I couldn't believe our luck.  Here was exactly what we needed, right when we needed it - and for free! 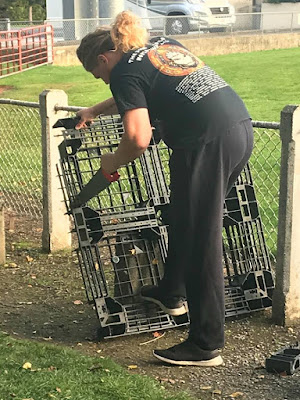 Trimming the pallets to size

We waited impatiently over the next few days for the weather to be fine and dry enough to turf everything out of the van, then Gareth set about measuring and trimming the pallets using a handsaw to make them fit.  It took three pallets in the end, which we fitted together like a jigsaw until they covered the entire base of the bed.  Then we made up the bed as usual and admired our handiwork.  As an added bonus, we now had some handy storage space in the pallet to pop our shoes and other bits and pieces in! 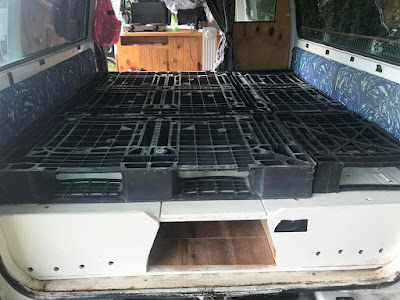 The jigsaw is complete 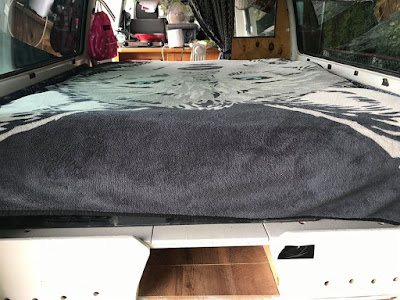 'You've gone up in the world!' laughed Bevin, when he saw the finished project.  He wasn't wrong there.  Having the pallet as an extra layer had elevated us up a good few inches!  On the plus side, we were now closer to the insulated ceiling, so as long as we didn't bang our heads getting in and out of bed we would be warmer!  I was worried about how comfortable it was going to be, sleeping on top of the plastic pallets but to my surprise we were way comfier than we had ever been sleeping on the timber.  I feel like the Princess and the Pea, tucked up snug as a bug in our big bed of layers!  Only time will tell as the air gets colder, whether we have finally beaten the demon damp but for now things are looking quite literally, up!
Posted by Jackie Norman at 17:46

Jackie Norman
Jackie Norman had her first work published at the tender age of seven and has been writing for both national and international newspapers, magazines and websites ever since. Also formerly known as Penny Wise from Simple Savings, Jackie is the co-author of The $21 Challenge and wrote a weekly column for That's Life! magazine for nine years under the same name. In 2016, after more than a decade of whittling down her materialistic lifestyle, Jackie sold her home and now lives on the road permanently, travelling the length and breadth of NZ in a campervan called Ken with husband Gareth. Her book, 'My Van, My Castle' was released in September 2019 and is published by New Holland. You can follow Jackie and Gareth's travels on Facebook at Riches Have Wheels, on Instagram @myvanmycastle or in print each month in Motorhomes, Caravans & Destinations magazine.